Vader is one of the more recognizable death metal bands in the world today. Right when you hear the opening ‘death thrash’ riff and bellowed vocals, one knows what they’re getting into. Alongside groups like Cannibal Corpse or Dark Funeral, they’ve stuck to a pretty steady formula that has served them well ever since their debut in 1992, this Polish group has created album after album that really sticks with their listeners. True, they’ve had some changes over the years, such as starting with a rather basic death thrash sound that was on speed on albums such as "De Profundis" then going for a more symphonic tone to enhance the atmosphere on "Welcome To The Morbid Reich", but they’ve never had that anomaly moment where one album felt so far out of left field that fans either loved or hated it because of the differences. For me, "Impressions In Blood" was my first listen and it featured some of the best elements of Vader- very catchy melodies, atmospheric breaks with the drumming, symphonic openings that really built up tension, and overall just a really awesome head banging style that has been consistently enjoyed since then. With album number 14 under their belt, the age old question is does "Solitude In Madness" live up the Vader legacy?

Yes, it does. Now granted, those who have followed Vader from the beginning know exactly what to expect- chugging speed riffs followed by blistering drumming combined with spitfire vocals that sound almost as inhumanly possible as what Archspire does with their music. Vader of course is known though for how well they craft their riffs and know how to pace themselves vs their technicality, and the opening 'Shock and Awe' is classic death thrash on speed that older Vader fans will love. Straightforward and mean, it is clear that Vader is not here to experiment but rather keep on doing what they do best- cleanly annihilating the listener. Peter, the lead vocalist and guitarist who has pretty much been Vader’s brainchild since the start, sounds as good as he did in his younger years and shreds to the core- his solos on each track prove enough. And his fellow members back his sound with some pretty awesome moments. Just check out the drumming on 'Sanctified and Denied' which feature their thundering tones that aren’t overshadowed by the guitars unlike other tracks like 'Into Oblivion' which is more your standard no holds barred Vader. Or the bass on 'Dancing In The Slaughterhouse,' more mid paced Vader but by far the most rhythmic and varied track by featuring more thrashy vocals as opposed to the singular death growl that everyone knows so well. It is a cover but feels right at home with Vader’s take on it.

The only downside to Vader continuing returning to their roots on "Solitude In Madness" is that there isn’t as much variety between tracks. When looking at Vader’s past works with their more symphonic bits, whether they were minute interludes or introductions to tracks, they seemed to flesh out Vader’s music more. With "Solitude…" you get a raw, yet polished sound that hammers over and over, but atmosphere is lacking a little bit. Plus, after a while the riffs tend to sound like riffs that were used on past albums as well. Compared to their previous effort, "Empire", they seem to be following directly from that. However, at least on this album, Vader do a good job at making the tracks as varied as possible in their riffs. No track starts out with the same riff at least. One can either get the furious start on a track like 'Final Declaration' that will floor listeners, or more of chugging, rock-oriented rhythm on 'Bones' that crushes or 'Satan Wept' that involve a ton of awesome headbanging groove.

Ultimately, if one is new to Vader, then "Solitude In Madness" is a great start. It may not have the double bass ferocity an album like "Litany" did or the symphonic grandiosity of "Tibi Et Igni", but it serves as the best example of what the core of Vader’s music is like: hard, but well paced. Very few bands can pull this off as well because the thrash elements and death metal elements mold so well together. Lots of other death thrash bands tend to feel like they are one or the other, not both. Vader didn’t make that mistake here. The album is a little shorter than other ones, clocking at, less than half an hour, but that’s the joy of Vader’s roller coaster ride- they hit hard and fast and then before one knows it is over. Definitely worth checking out for those who like their death metal rocking a bit with speed but not quite looking for death n’roll. 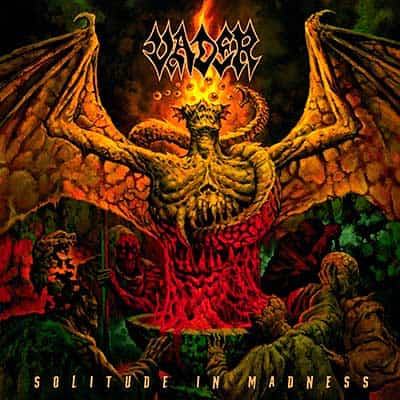