Vader - Welcome To The Morbid Reich

No need to introduce this band since they've been around since 1983. These death/thrash genres that Vader falls into have nothing but good riffs, solos, vocals and songwriting on this album. Everything that's positive in terms of the music is there. There's no lagging from a musical aspect. Another album that you can listen to over and over and never get sick of. I don't own any other Vader releases, so I can't really compare this one to their previous ones. But there's much to say about this latest release by them.

2011 was a year of disappointing metal releases. This was one of the albums that didn't fall short of fan's expectations. Vader fulfilled everything musically and they're only a 3-piece on this lineup. 14 tracks of purely dark and unrelenting darkness that has an enormous amount of energy put into the music. The riffs were catchy and the tempos varied. That crunch tone of the guitar was most noteworthy. It sounds like they tuned down their guitars to make them fit in with the morbid setting.

Peter's vocals were deep for the most part but backup screams were also present on here. Both guitarists had some really killer leads. The drums were going with some fury on tracks that had faster tempos. They fit in well with the music. No lagging in that department at all. Amazing songs that clocked in about an average of 3-4 minutes in length. There were some instrumentals too as well as bonus tracks. "Troops of Tomorrow" was a killer ending to the album.

The production/mixing was awesome, but it was difficult to hear the bass guitar. That's the only real negative thing to conclude about the album. The rest of the instruments blended in smoothly to the mixing. Really memorable songs that expend death/thrash to the core. YouTube "Come and See My Sacrifice" because it's a good track to check out. The tempos on all songs varied. A lot of tremolo picking galore. The guitars were again at a perfect chunky tone that suits the double genre fitting.

If you're a death metal fan or a thrash metal one, well Vader fulfills both of these genres so "Welcome to the Morbid Reich" well suits these categories. Again a great album to listen to repeatedly and can never become distasteful. The overall musicianship was amazing. No mistakes and everything came together on this one. No leads that were misplaced or overused, variety in tempos, and dark as hell. Purchase this one because it's so worthy of praise! 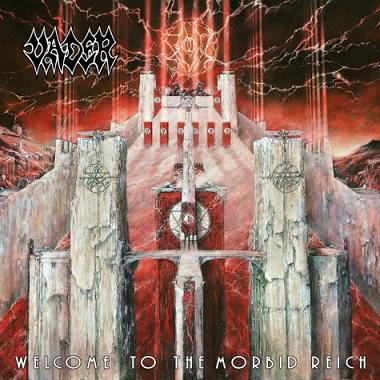