From Southern parts of the USA with their music rooted in doomsday prophecies and the ancient demonic dark forces of the universe VadimVon presents total blackened death metal with "RiseKhaosInfernal". Fast and hard is what this album is about and of course it always keeps to the darkened path with it's tracks delivering hidden messages from the unholy abyss bringing it's blasphmous tones from the Netherworld's darkness and into our humble realm. This album is a must for the choosen few who can appreciate where it is coming from.

Having it's atmospheric moments and sticking to a classic black metal mood "RiseKhaosInfernal" did manage to keep my interest all the way through with it's classic changes, interesting riffs and raunchy yet screetching vocals.. It may not be the best album in my opinion but it is certainly not boring. Some could say that the music could have been more on a mature level but then again that would steal from what this band and this album is about and changing it's styling in anyway could take away from the cultish feel it gives. Keeping all this in mind the only downside with concerns to this album is the fact that it tries to hard to be "Evil" but on the upside this is what this band is about "Evil" along the lines of demons, the apocolypse, hidden forces and thngs that go boo in the night so to speak. So this album is reaching it's goal and full potential and personally I do not dislike it so will kindly give it a 4/5. 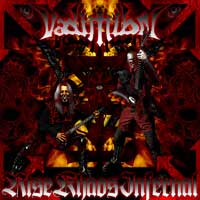 Self released
Reviewer: twansibon
Jun 26, 2009
Next review: Verzivatar – In The Shadow Of Sombre Clouds