For this review, we are going to give up our continent and return to the new world in order to find some nuggets. It is always surprising and interesting to see that a North American band, in this case Vaelmyst, can sound like an European one. And yes and this is perhaps our main flaw in old Europe in this very particular style of death metal and melodic subclass we are not far from reigning supreme over the world. For this reason we are quite often skeptical about what the new world can offer us and more specifically the United States of America. Nevertheless after 2 singles and an EP "Earthly Wounds" released in 2018, the trio from San Francisco, California, returns to the front of the stage and offer to our hungry ears an LP soberly titled "Secrypts Of The Egochasm".

I appreciate this album because it is not monotonous, single use, yes we are inside death metal but listening carefully we also find references to melodic and sometimes even progressive genres. Vaelmyst is an interesting composite of several influences. It is hard to know what the major influences might be, but for sure it is neither Billy Joel nor Bon Jovi. Everyone will be able to find the reference to a band they like, we will wait to know what will be the path followed by this trio in the future, it is still in the making.
After an Ep that we will not remember even if we could already perceive some tremors, this LP is quite coherent and homogeneous, and we can congratulate them. Technically the trio masters their instruments and their compositions, it is obvious. It is aggressive when needed, with vocals very much in line with this specific musical style, it is powerful and adds depth to the riffs and blasts already present.

In addition, the band masters the conception of the whole fairly well, the songs are well distributed with an instrumental track that could serve as a link between the various parts of the album.
I think it would be a mistake not to let an ear hang out on the side of this band, because without being exceptional (for now), there is an idea that seems to be good. I just hope that we will not have to wait another three or four years more to see and hear the sequel. I wish them all the best and nothing but the best. If technically the level is there, the maturity helping, the cocktail could be explosive. This band is to be followed with interest and this album will delight all lovers of the style.

So are there any flagship songs or some track that would serve as a reference? I will respond voluntarily in the negative. It is a band's debut LP, and it needs to be listened to carefully, it is full of possibilities and there will be enthusiastic listeners as well as detractors, but for once make up your own mind, I am pretty convinced and you? 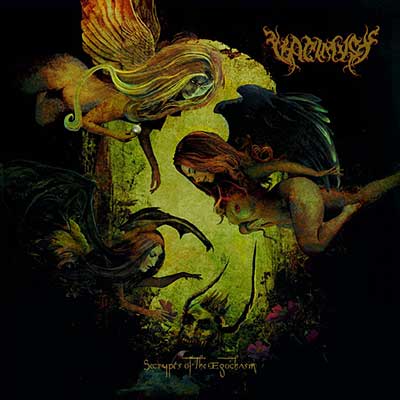 1. Espirit De Corps
2. Dawnless
3. Spineless Throne
4. The Ghost Of Ire
5. Ghoulish Delight
6. Envenom The Sea
7. Into The Egochasm
8. The Coin Of This Realm