California’s Valdur return with their fifth full-length entitled “Divine Cessation”. What you have here is an ultimate lession in what brutal death/black metal should sound like. This is also a band that rides that fine line between the black and death genres without going to much in favor of one side or the other. With a lot of bands you can usually tell which genre is the dominant sound. With Valdur, I would have to say it’s 50/50 throughout the entire album. The band plays through these 7 tracks with such an unforgiving and unrelenting passion only reflected by those who’s passion is equaled in the dedication to their perspective art. These guys know what they are doing, and show no signed of slowing down or stopping any time soon.

Classic, cold, and unforgiving riffs in the vein of Immortal, Dark Funeral, Impaled Nazarene, old Samael, Hypocrisy, and Seance. The reverence for tradition can be felt for the entire duration of the album. The only difference is this guitarist seems to be a little more proficient, at least as far as performance of the bands material goes. The mixture of drumming styles resonates nothing but sheer talent despite the monotony of the tom and snare strikes as well as the double bass. This is the only problem I have with the album. I could just tell that the drummer has more talent than this material allowed him to express. There were times it almost seemed like he was trying to break free of the materials drumming restrictions. Despite this, I don’t think anything is triggered here, at least not as far as I can tell. One of the good things is that the level of fluency with temp changes is remarkable.

The bass is right where it needs to be for the material presented. Anything more would have been overbearing. It’s releases like this one that are showing me that the bass doesn’t have to be a dominant aspect all of the time.

I was trying to pinpoint a vocal vibe here and I think I found the right one. For those of you who remember the band of Symphony of Grief, this is what you have in store, only a tad more from the throat than the diaphragm. This was a great release overall. The band takes elements from doom, death, and black metal and unites them almost flawlessly. I love bands like this who take pride in their art. Very well done. This release will not disappoint. I would recommend this release to any extreme metal head who is looking for something new and interesting. Interesting describes Valdur perfectly! 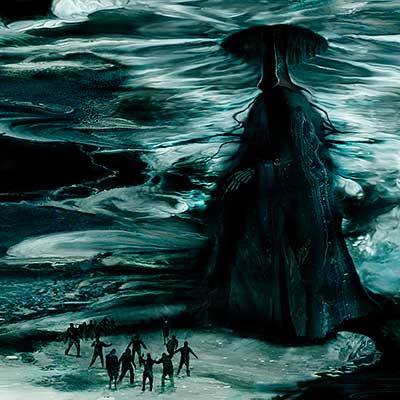