Valediction's debut full length is a strong melodic death metal album. Drawing on influences that range from Dark Tranquillity to Amon Amarth to Sybreed, the music is full of great hooks, guitar passages, and industrial bits that would make the current Raunchy proud (such as on "The Primitive Architecture"). The album opens with a brief melodic instrumental before jumping into "Moment Of Decay" which serves a great mix of keyboards to back up the guitars and vocal snarls that go along with it (which sounds a little bit like One Man Army and The Undead Quartet). Other tracks like "The Bleeding Tower" merge trade offs between the guitars and keyboards for another great slab of melodic death metal before coming together. The solos are always heavy and enjoyable- showing off more of a mellifluous skill rather than trying to just be overly technical and fast.

One thing listeners will notice is that the music is extremely keyboard dominant; they are always present, either as a main instrument or a support with the rest of the music. While this helps with the melody, lots of times fans may begin to wonder about the variation in music structure overall. Aside from good riffs and solos mixed with keyboards, there isn't too much else to go off of for the group save for maybe the soft sole guitar work of "Requiem" which eventually mellows out to some very creepy, but effective keyboard piano work which suits the title of the track perfectly, and makes the greatest impression overall of all the tracks as being the hallmark of the album for a melodic death metal standard. It is always great to see bands try to go for more of an organic feel with their music rather than make everything sound too electrified.

Overall this is a fantastic debut that merges symphonies with heavier metal bits. Valediction doesn't stand out as a unique offering, but it makes its presence known by trying to be more than just another rip off of another band. Sure there are a lot of melodic death metal influences (mostly from the Gothenburg style), but 'The Primitive Architecture' is the perfect dose for those looking for melodic death metal that doesn't feature too much of the dramatic and prominent keyboard passages like in Dark Tranquillity but also isn't too easy going or basic as a band like At The Gates, which was known mostly for its guitar work. One could consider this more 'in the middle,' much like how In Flames was before they changed to their more modern sound. Definitely worth checking out for those who want to capture the spirit of the early 2000s. 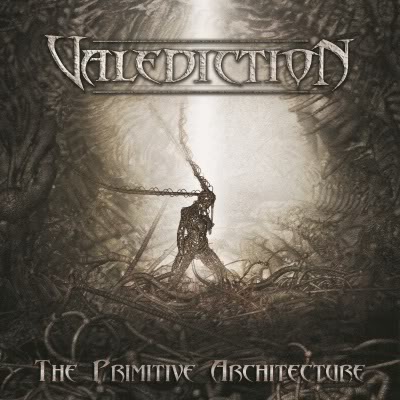