Validor - In Blood In Battle

Validor is an interesting group hailing from Athens, Greece that merge folk and power metal together. Originally a four piece the band now consists solely of Odi Thunderer who created most of the music to start with back in 2008 and currently handles guitar, bass, and vocal duties. "In Blood In Battle" is not a new album for them, but rather a re-recorded version with updated instruments but leaving the original vocals. When it comes re-recording albums there is always a love hate relationship between the new one and the original sound, minus the different album art. Some groups like melodic tech death Inferi and their re-recorded debut effort "The End Of An Era" doesn’t really differ from the original save for a fresher production, and then there are those like Hypocrisy who re-record their album "Catch-22" with new vocals because fans hated the original and it was like a new album altogether versus a rehash. Validor’s re-recording borders a bit on both of these boundaries so those who have heard their debut from back in 2011 may not be quick to jump on this album, but Thunderer and his fellow percussionist Apollo Giannoullis bring enough variation to the new recording that it may interest old fans as well as new.

For new fans, Validor’s sound is best described as Iron Maiden meets Tyr. Right off the start 'The Riddle Of Steel' the band takes directly to the folk route using acoustic guitars and percussive beats leading Thunderer’s clean, yet soulful singing. 'Sword Of Vengeance' is a sudden 180 change to electric guitar passages and a vocal style that seems like a deeper, more mid paced Iron Maiden. The keyboards are there in the background to help support the folk side of the music, but it feels like Validor seem to lean much more towards their power metal side versus the folk in much of the album. Sometimes there are softer bits such as the introduction on 'The Last Emperor' with the more spoken, story-telling style of the vocals that add to the fantasy/ medieval feeling of the album or the percussive rhythms of 'Through The Storm' that bring more of the folk side out. But, a lot of the faster tracks like 'Dark Tower' tend to feel more like generic power metal and take away from Validor’s unique take on folk metal.

The keyboards- though subtle on most of the album- are probably the biggest change and positive note for the re-recording. They are not flamboyant but mix in with the guitars well during the solos such as on 'Stormbringer,' whose guitar melodies and pace feel a lot more like 'power meets folk,' and should appeal to fans on both sides of the genres. Vocally, because the original vocals were used, sometimes they feel they are fluid with music (such as on 'Stealer Of Souls' where there is more vocal range) and other times they feel somewhat separate, like in the front of the music versus being with it such as on 'Wrath Of Steel.' Listeners may feel a little divided on them, but they definitely feel right in the proper vein of what the music is trying to accomplish with the album story and atmosphere. The guitars are the main driver of the power metal style with the drums being fluid enough to balance the faster parts and the slower, more percussive folk moments that there just quite aren’t enough of overall.

The title track can be summed up as the best mix of Validor’s style of folk and power metal. There are enough slow and fast melodies to entice listeners, and of course Thunderer’s story telling doesn’t let up with his battle tones. The way he layers his vocals almost seems like there are 2 vocalists at times, adding more dimensions versus some of the other tracks. And, of course, the outro to the track is grandiose and perfect for power metal enthusiasts. In the end, old listeners have an album with some upped production and a few new instruments that may be worth listening to once through, but compared to the original "In Blood In Battle" it doesn’t quite have enough to really make a difference that it might get listened again. For new fans altogether, Validor’s style is interesting enough to keep power metal fans enthralled by the lyrics and music, but for folk metal fans they may get a bit off put by the heavier sections of the music without the touch of more organic instruments. 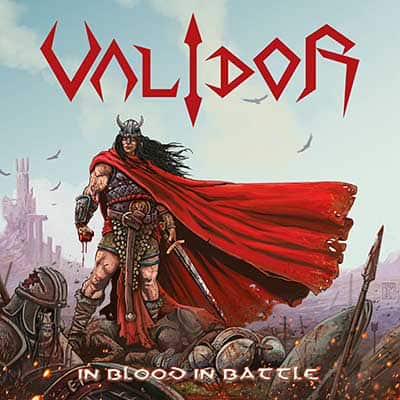 1. The Riddle Of Steel
2. Sword Of Vengeance
3. The Last Emperor
4. Stealer Of Souls
5. Through The Storm
6. The Dark Tower
7. Stormbringer
8. Wrath Of Steel
9. In Blood In Battle