Darkj's new Pagan Black Metal solo project was summoned on April 11, 2014. A month after the closing of Darkj's Frozen Mist project and after the release of the final album "Paganwinds". Darkj decided to continue in the footsteps of Frozen Mist, but under a new band name, hence Valknut was born!

Wind
Weave in some barbarian riffs into some sacrilegious drum beats and add a strong coarse, vocal to the mix and you have some idea of what this track portrays.  Its passion never ebbs for a second but continues with its violation in the darkest and most transient ways. The bass is moody with edge and protrudes in an ambient guise along with a brutal riff and together they expel a malevolent but spellbinding and sinister boundary.

Upheaval
This track is much more searing and shrill. It twists with an ungodly motive and executed in a sultry manner. Smoldering with lurid passions of seething guitar and pagan blackness in its purest form but with a radiating darkness that sounds utterly demonic. The apocalyptic structures are disturbing and yet arousing at the same time and thus creating a bruising ambiance.

Kindred
Bubbling under the surface is a creepy bass hook likened to bindweed, literally wraps itself around a bold riff that demands attention. Flowing with an eerie presence it grazes the aural, until however it changes direction and then wreaks havoc in an all-out brawl of intrusive malevolence. Creeping sneakily, leaving the listener in a state of perpetual anticipation.

Ritual
Showing off its depths by a pulverizing, sonic electric riff that scrapes across the ears with no regard for its victims! It is threatening and antagonistic in its advance and opens the door to a more indecent proposal, thoroughly grabbing with both hands and is extremely excitable with its punchy beats and brawling vocal stamina.

"Hosting its own charms if that is the word for something so gnarly and idiosyncratic that instantly lures with its raw confrontation and gnawing steadily on the ears, it is a safe assumption to say it is unusual and obscure!"

Flight
Incites as well as breeds an ever increasing hostile environment for itself to nestle into as it compels and fluctuates in a tempestuous attempt to cause utter mayhem and quickly surpasses it with snarling vocals, tormenting, teasing and twisting themselves into an ever changing flurry of tempos that hasten an imposing and satisfying uniqueness.

Sumbel
Is an edgy and menacing instrumental track that gives the listener the feeling something is about to happen which it does, as it slips into a mesmeric array of notes, brandishing themselves as mystic and mysterious, and probably the most creative track I have ever heard before!  Seizing the attention and looming in a formidable manner, it could be likened to a sound track from the film The Wicker Man as it is very enigmatic and unfathomable.

Summary
This E.P goes from weaving to sultry, bubbling to pulverizing and hostile to menacing all within the six tracks contained on it. It’s an E.P that is just as secretive as the genre it is tied up with.  It gives nothing away! So it leaves you in a quandary as to where it is going and so has a superb air of mystery attached to it. You can even add your own interpretations which is a really good quality to have. Hosting its own charms if that is the word for something so gnarly and idiosyncratic that instantly lures with its raw confrontation and gnawing steadily on the ears, it is a safe assumption to say it is unusual and obscure. Primed with the characteristics of unsettling vocals that go way beyond the blackness and stirring the emotions vehemently, dragging them kicking and screaming into a sinister apocalyptic terror is just one way of putting it! At times it goads and coaxes the senses and other times it repels them as it was I am sure, designed to do, but no matter, what it does do, is gain your attention and furthermore secretes a potent essence that is both unpredictable and lingers with a caustic intent, awakening new insight into a very striking and often misunderstood genre. 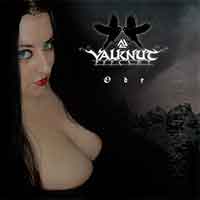