If Amon Amarth decided to throw in some black metal vocals and go more for Norse drinking music than Norse mythology like their death metal usually proclaims, then that is how one could describe Vanir. Their album here is very catchy with the melodic folk metal base with the chugging guitar rhythms, bagpipes/ keyboards to add quite a bit of dancing energy and enticement, and rough, snarled vocals to add just the right amount of 'metal' to the mix so this doesn't feel too cheesy or drawn out along the lines of some bands like Korplikaani, whose folk metal melodies tend to embody the genre a bit too much. Vanir, on the other hand, add just the right amount of grit and bite to their music so it is a bit rough, but still very digestible without feeling too slick or polished. Viking/ folk metal wasn't really meant to be polished unless it was being performed by Eluveitie, one of the foremost melodic death folk metal bands in mainstream metal today.

On the downside, while this album is very catchy due to tunes like "Gildet" and the organ/ keyboard heavy "Lokes Listighed," overall the album does feel to be a bit one sided. The vocals, as darkly entertaining as they are, tend to sound a bit dry and worn out by track four because they mostly stay in the same tone all the way throughout the music. Usually a variation of clean vocals, moaning and drunk as they may be, would have been a great addition to the folk elements overall with the music. As it is, though, the bagpipes, keyboard, flute, and organ adds plenty of folk dynamics to the metal and boils everything down to a very straightforward folk album. Some tracks like "Holmgang" may seem a bit speeded up and rushed for the pace overall, embodying more along the lines of melodic death metal with rock influences, but the bagpipes still add plenty of flavor without being too overbearing. The organic instruments are used quite a bit, and sound clearer than the guitars, but it is just enough to keep listeners entertained without feeling like they had too much to listen to... or drink. 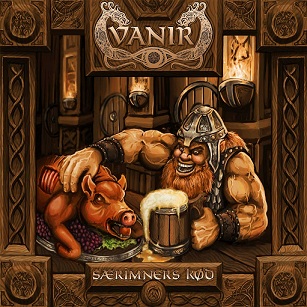