Violated's debut, "Only Death Awaits", is the ultimate tribute to Slayer. The riffs, the melody, the drumming, and even the vocal styles sound just like something yanked from "Reign In Blood" or "South Of Heaven" with just a tinge of Metallica. It's thrash galore, and fortunately isn't a total rip off or too poorly produced. The music is certainly groovy in the vein of something that Dew Scented would do, but also holds a very raw, primitive buzz that heralds back to the 80s days. Many of the songs on this album try to be melodic thrash with plenty of chord progression with a lot of solos that aren't blistering, but instead well done with good harmony. The vocals certainly sound like a deeper version of Tom Arya from Slayer meets Jasta of Hatebreed, but hold their own in the sense they have a lot of groove to them in the way he screams. He even sings for brief moments like on "What You Give is What You Get." The drums are by far the most simple thing on the album, but can be just as rapidly paced without breaking the melody.

Not everything on the album is Slayer influenced thrashing fun. There's a sample from Predator at the beginning of the album to set the mood for the chaos to come, and then "What You Give Is What You Get" has an excellent bass line in the beginning that is sorely missing from the rest of the album. "Apokalupsis Eschaton" is an acoustic piece that sounds nothing like thrash at all but holds a very dark mood that sets up the next track, like a calm before a storm. A great momentary interlude before things heat back up again. "Only Death Awaits" has some great drum work that is sure to rock anyone's head off, even if it sounds a bit too much like Slayer again. And the track is a little short compared to the rest, which can leave listener's hanging.

Obviously if one is a fan of Hatebreed, Slayer, Metallica, Dew Scented, Megadeth or almost any thrash band they will enjoy Violated. While some fans may feel the group's kinship to Slayer and Metallica considering how similar their styles are may feel the credibility of the band has been "violated," make no mistake that Violated is certainly a group with talent. The riffs are catchy, if not inspiring. The music energizes and makes one remember the good days of the 80s when things were raw and catchy compared to a lot of overproduced music that is out in the world today. Violated should be thrashing for a long time and continuing to pay homage to their thrash metal forefathers without tarnishing their legacies. 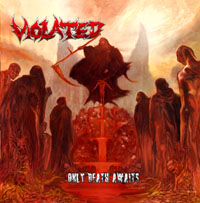