Fuckin nasty rock'n'roll! So simple as that and nothing more. This is what you'll come up with once you decide to deal with these lunatics from America. Rock'n'roll with a punk attitude at its best and of course the whole outcome is presented in a massive wall of grinding madness in age 2014. This makes sense, once you find out that the so keen to your ears voice that rips every song is no other than our dear fellow, Chris Reifert from Autopsy/Abscess/Death/The Ravenous and many more.

Now that the mystery is solved, let's focus on the music on this first full length of Violation Wound, which bares the same title as the band's name, and it really packs a punch! Tight, small duration songs that have the effect of acid in your face. Party mode here and Violation Wound take the fun a step ahead with 18 songs that last no more than 26 minutes, but are able to make you lose your head due to uncontrollable headbanging! I mean seriously, those guys know how to do this thing. Fast songs, with tight song structures, consisting of one or two main riffs that have the tendency to stick in your brain for a while. 26 minutes is a really quick period to leave a party that promises a really wild night so what you'll do is simply play this sucker over and over again.

To those that are familiar with mr. Reifert, and the way he understands the words, extremity and music, everything got really simple in the beginning of this crap. For the rest, I must really agree with what the band states at its FB page. "Nothing trendy, nothing wimpy, nothing pretentious, just quick-fire face melters fueled by aggression and kick ass riffs that burrow into your skin". I dare anyone that listens to it, to come out and prove that wrong. Can't happen cos those guys simple got this shit under their skin, and in Violation Wound they do only what comes naturally out of their guts straight in your face, stinky and raw as it should be. Production of course is premature. No word for technology here. Just what comes natural out of their instruments and you know what? It fits this damn music like a glove. The artwork is also a plus in this menace. Black and white, adding to the prematurity of the entire outcome. Those who know what Reifert is his squad are capable off, have already starting looking for a way to purchase this. As for the rest, make a favor on yourself and have a bite. Can't turn you down! 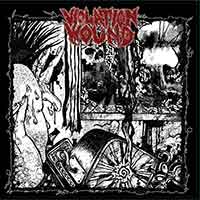