When the word virus comes to your mind its not usually a good thing. Torment, pain, and anguish. And thats only the machine. Well then theres Virus, an avantgarde band from Norway. Some in the metal circle maybe familiar with Carl Michael, or Esso from this band. They were part of Ved Buense Ende, and Beyond Dawn respectively. Its been said that Virus is a continuation of VBE, and the experimental progressions are definitely there. It trickles through the system in a much less metal way this band, and its done very well. These players are at the top of their craft, and you can hear them going off on strange chord progressions and single note harmonies. So dissonant its hypnotizing.

This current release is titled "Oblivion Clock", and its a 7 song EP. I don't know why they call it EP, when its that long. The material as mentioned is very disharmonic sounding, although its smooth. It carries itself amazingly well and the vocals mesmerize over them making it an enjoyable ride. Through the cold mountains, through the autumn debris. I enjoyed this a whole lot. First listen it didnt hit me at once. Nothing stood out jumping track to track. This album should be listened start to finish to absorb its true magic. Track like "Saturday Night Virus" has an opening riff reminiscent of Destruction/Kreator with its sick pulloffs on guitar, then goes into a Voivod "Nothingface" sorta vibe. While its progressive in nature, it flows smoothly.

Although the band could care less, I think much of this music goes unnoticed, and underappreciated. Its lush, rich in texture. Soak it up. I sure did. I would admit black metal elements as in VBE would probably appeal to me a lot, as I wanted to see a direct followup to "Written in Waters", and sadly it never happened. Thats what makes a unit sold, and inspired. Having different material, and other players bring their approach to the table. I said before Virus also contain a member of Beyond Dawn, another avantgarde Norwegian band who put out 2-3 albums before disbanding. They were never quite metal either, and the players offbeat jazz flare fits rhythmically along with it all.  "Oblivion Clock" ticks in four new songs and as a bonus, the CD includes the much sought after "die hard" 7" tracks that came with only 250 copies of the Agent...LP + an obscure track from the Carheart sessions in a hitherto unreleased version. I certainly cant hear a difference in recording value, so Im not sure which tracks were sent to me. I don't recognize one of the bonus tracks I'm looking for, so off to scour and embrues the system. Recommended! 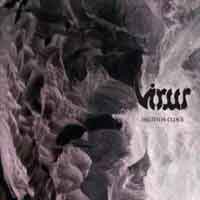