Founded in 1994 by guitarist Kevin Mennsen and hailing from Illinois (USA), these perverted musicians have developed into one of the most infamous and disturbing death/grind commando units to mankind. Not only in terms of sound, but their absolutely sick cd covers from their first two releases put hardened eyes to a severe test.The first demo was released and distributed by the band in 1996. After a few line-up changes the band recruited Lividity axe madman Dave Kibler and drum maniac Nick Null. After playing a number of shows, Waco Jesus signed to United Gutteral Records and the bizarre "The Destruction of Commercial Scum" was released. Playing anywhere possible, from backyard beer bashes to major metalfests, Waco Jesus began to build a strong fan base of loyal freaks and make a solid name for themselves in the underground scene.Just as the band was starting to get bigger and better things offered to them, Dave Kibler decided to leave Waco to focus on his band and shortly after that the band suffered a devastating set back when Nick Null overdosed and died. Not willing to give up, the band recruited new members and released their second cd "Filth" on German record label Morbid Records. Directly after the release the band supported the release with a 25 day 10 country headlining tour in Europe. Waco Jesus continued spreading "Filth" in the USA with a short two week tour of the west coast and numerous shows and metalfests. The band capped the success of its' second cd with a spot on the Fuck the Commerce Fest in Germany in 2005.2006 with their third full length release, "Receptive When Beaten", and yet some new additions to the line-up, the mighty Waco Jesus continues their series of attacks on human ethics. Musically the guys have become more polished but they show no signs of selling out. "Receptive When Beaten" without a doubt is the pinnacle their releases combining extremely fast grinds, brutal catchy rhythms and psychotic vocals. The band describes their sound as Scum Grind/Shit Rock and the new cd is unrelenting from start to finish, guaranteed to grind your ears into a thousand little pieces.

From the first few seconds on, you know what you get. Major league death grind! This is the right mixture of true american style death metal and grind. On this cd you can hear the expierience from Waco Jesus and the good sound does the remaining. The speed of the songs is constant , the groove and brutality are always present. May the vocals could be under more variation. The band knows how to write sweeping songs and how to play them. There is nothing more to say, for all fans of this genre, this album is a must have! In march 09 the band is on tour through europe, so check the dates and visit one show. 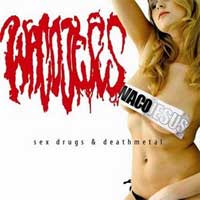 1. I live for this shit
2. Evil force
3. Down in flames
4. Nothing in common with us
5. Straight form the slums
6. The undisputed always denied
7. Losing my mind
8. Sex Drugs & Deathmetal