For Waldgeflüster's second album, they've taken more of a straightforward concept album approach compared to their previous 'different theme' based songs. Basically 'Femundsmarka' is a story split between three different epic tracks called "Kapitel" and a prologue, interludes, and an epilogue. Altogether, the flow of the album goes well, alternating between the shorter instrumental tracks that are meant more for atmosphere compared to the longer, black metal tinged pieces; but even these tracks are greatly atmospheric and orchestrated. One could compare the work of the group- run by only two people- to that of Agalloch for the guitar tones and the way the music can tend to repeat itself with just a few riffs, but at the same time it is very enjoyable and easy going rather than too fast or too slow. Even though there are no clean vocals- all of them are a faded, harsh wailing tone that is masked by the distortion of the guitars- basically one can expect the music here to be more in the vein of Agalloch's debut. It's heavy at some parts such as on "Kapitel II," and then suddenly will drift into just a few simple acoustic guitar moments that will repeat on for a bit and then jump back to the heavier stuff, yet interweaving the same melody into the background for greater effect.

Between the longer tracks, there is not that much difference between how they are structured. Listeners can easily get accustomed to the mix of wintery sounding guitar and shrieking with the heavy chords with the drums thumping in the background and the alternation between harder and softer moments, and also can become easily bored by it. That's what the interlude tracks are for. Each one features something a little more different, and also a little more atmospheric than the usual stuff that the band will put out. "Interludium I" features mournful piano behind a dramatic synth backdrop whereas "Epilog" is just simple, acoustic pickings. "Interludium II" is the only track that isn't instrumental and sounds like some of the longer "Kapitel" ones because it features the same heavier music structure and has vocal use, but the vocals are so full of wailing that it might as well be atmospheric black metal with a harsher tone versus a track with lyrics. It's a bit more acoustic than the usual, but on the downside just as repetitive at times, especially near the end where it's just three strings being played at a time on the guitar. Great for atmosphere, but not the best for those seeking variety.

Still, with such epic works it is very difficult to keep everything completely original. As said before, this is more atmospheric or folkish black metal that is meant to kind of absorb and sink into rather than thrash and headbang about. It is heavy enough to entice that, but the entire concept album seems to require more of a sitting down and listening closely kind of attitude. And of course one has to appreciate the efforts and amount of noise that only two individuals can create on their own, when it can often sound just as good as about five people putting in the effort. The language barrier may become a difficulty because it is German, but that's what Google translate is for... don't let it stop one from getting engaged with some good music. 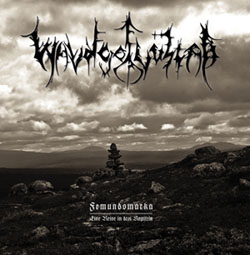