Let me make one thing very clear: I am not a fan of clean vocals in metal and/or female fronted gothic metal groups, the likes of Evanescence, Within Temptation, Nightwish et al leaves me bored to tears and slightly cross! The soft, operatic female vocal leads do nothing for me, especially when the dark metal vista that supports them, just seems to grate against one another. Don't get me wrong, this isn't taking us down the path of questioning womens musical role in metal (although it does seem to get teadious with just the bass player, keyboards or operatic vox all the time), I just feel a little disappointed when the same shoes keep getting filled by women in metal, when they are capable of anything they want!

Waldheim, from Bilbao, Spain, are in this category. They do some things differently (some of the tracks are teasingly brutal), but essentially the main issue I have with this record, is that the mix of the female vocals seems to "sit" on the rest of the production, instead of being "in" the production (which otherwise, is rich and lavish)...the metal of the band (plus keyboards) is mixed and produced well and the playing is good too. The death metal style vox of the male singer is nasty and brutal sounding, right up my street, but as soon as the female soft, floaty vocals come in, it's almost like a switch in my mind just turns itself off.

The gruffness of the male vocals and the softness of the female's long, drawn out lead lines makes me feel like something's missing. Couldn't she have done something a bit different? Where's the passion? Where's the balls?! (haha, yes, I can guess the answer to this!) I'm just not convinced that the female vox and the keyboards (in places) work with the rest of the metal that's presented here. If you took out the anomolous aspects, I think you'd be left with a tasty bit of death metal but it seems bound by it's generic structures and pop choruses, which makes the metal lose it's lustre and natural defiance.

Maybe they were going for some kind of "Beauty and the Beast", light and dark concept but it just totally misses the target for me.

Highlights include the drumming (the production and playing is awesome) and the guitar work is really beautiful and passionate, expertly executed. There are moments of brutal epiphanies and you think to yourself, "ooo, this could get really interesting" but then it becomes strangulated by the constant reprise of pop choruses and clean vocals.

There are two instrumental tracks on this record, that are truly beautiful, full of melancholic wonder and fantastically written and performed but unfortunately, the rest of the package just isn't for me. For fans of the genre. 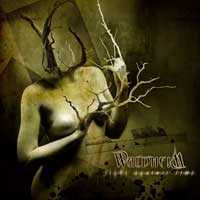 1. Fight Against Time
2. Bridge Of Sand
3. Lost In The Rain
4. Break The Silence
5. March Of Empty Souls
6. We Will Fall Together
7. Illuminati
8. Memories Of Fate
9. Valzer Infinito
10. Forest Ending