Wall Of The Eyeless - Through Emptiness

Wall Of The Eyeless- the duet- is highly unpredictable... which is a good thing. From their debut demo 'Through Emptiness,' there are only a few tracks to follow, which makes a margin of error that much smaller, but the band certainly pulls it off. The opening track is pretty much the standard chugging, groovy Death Metal offering with the rather fuzzy, demo production letting the guitars and vocals lead with the drums tapping away in the background. There isn't much as far as technicality goes with the songs, but that is made up for by progressive shifts in the music. On a track like "Do We Belong Here" the music can be churning Death Metal and suddenly switch to more acoustic, softer individual string picked melodies that would suit more Doom/ Gothic Metal structures. Other tracks like "Rain Song" can suddenly break out into a Death n' Roll melody that is a huge surprise, but very catchy and highly enjoyable amidst the blast of drumming which finally felt like waking up and kicking up more than just comatose rhythm. Plus the guitar solo involved isn't too shabby either. Overall, a strong start from these two performers who show plenty of potential to be more than just 'another generic Death Metal band.' 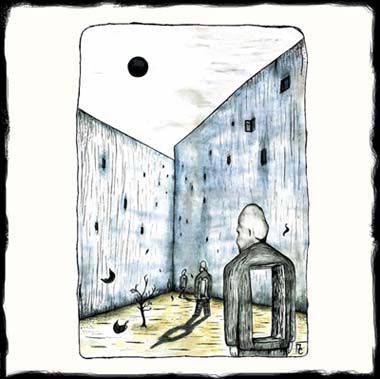