Now known as Warbeast Remains (their third name change), and this album was released last year, the band are from Belgium and they originally formed in 2008 as Warbeast. First off, changing your name really does not set the memory banks ablaze, but in some cases this is out of the bands control, but in another sense, there’s plenty of reference material available nowadays in regards band names!

Musically, Warbeast Remains sound like a bit of death metal, a bit of modern metal and a bit of death/thrash. I must admit, listening to this release over the last few days has left me confused. I cannot decide which way the band is heading in terms of their musical direction. The ‘Intro’ has pretty good intentions, almost a rotten sound that leads into ‘Beyond Redemption’. This has a strong thundering beat, unfortunate clinically clicking kick drumming, but redeems itself with a cool vocal delivery, a nice “little” death growl (not!). The closer ‘Fleshless’ is more like something Legion of the Damned would release, but with added guitar solos (yes I know, it’s death thrash too), until that is the track slows into the lead break, now we are cooking, this is more intersting. The upbeat thrashy death really doesn’t set anything apart from the rest of the world whom seem obsessed with mixing the two genres, certainly over the last 3 or 4 years and beyond but as I mentioned earlier, there are clear “modern” metal influences, especially in the drumming and in some of the vocal screams. Therein lays my enigma, often guttural I don’t find this vocal fits the music, it’s usually more a rasp associated sound I am used to, but even that I take with a cynical pinch of salt in a over saturated death/thrash/core world. ‘Warcry’ is a little more palatable, its more up tempo, you still have the massive growling howl in the vocal, the pace gets your blood pumping more than some of the other music that has come before this, that is for sure.

In general, the arrangements are simple and effective, but I don’t hear any major cases of virtuosity, there is no individuality unfortunately. Yes you have the rousing moshing parts like say Sweden’s Unleashed, but they are too infrequent for my liking. To say this is a poor release does not give the band credit or the full picture. They are perfectly fine at what they are doing, it’s just an oversaturated style that I hear time and time again and ‘Stronghold’ does not retain as much appeal as it could in someone else’s playlist. 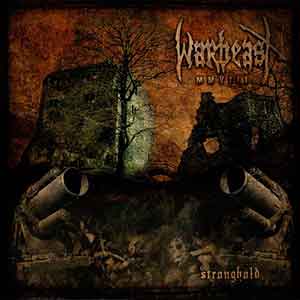