This is a debut album from Warbell, from Poland, playing melodic death metal. A very saturated field, but that aside, musically this band stand out. There are many moments where you get the down to earth heaviness, but the real jewel is the bouncy groove that comes out, especially on ‘The Chosen Ones’. Throughout the release there is a consistent level of professionalism and talent on show and mid-way through, from say ‘Black Screens’ there is a variation on the style. For this track, the silent whispering vocal in places plays out like the crippled emotion of the Deftones (no way musically comparable I should add!), and then it becomes musically something of a the pattern of bands like In Flames’ progression as it becomes more commercially acceptable as the tracks flow through the album. In fact, In Flames post "Clayman"/"Reroute To Remain") and Omnium Gatherum’s early work (debut album) spring to mind as easy comparisons to this album, a blueprint meticulously followed.

This is a very pleasing album, very easy on the ears with nothing really challenging to contend with. Warbell play their art well and have enough of their own prowess to survive the large challenging market. 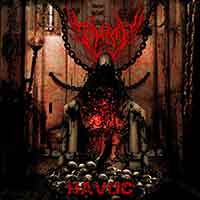