Warfist – Metal To The Bone

"Metal To The Bone" is the second album from Poland’s Warfist. "Metal To The Bone" does exactly what it says on the cover. Its 30 minutes of balls to the wall thrash and death metal combined with the filth and glory of an intertwined Venom and Bolt Thrower. It’s a beer and sweat soaked joy of an album.

Kicking off with the somewhat mid paced 'Pestilent Plague' which trudges along in the same rhythm as Slayer’s 'Dead Skin Mask' while 'Convent Of Sin' gallops along with Hellvomit barks along like a young Cronos. 'Tribe Of Lebus' is a slice of classic old school thrash in the vein of Sodom and Kreator. The title track is just superb and is a sure fire future classic in the bands live set.

What I like about Warfist is that they fall into a lot of slots at once. They mix a lot of styles and will appeal to a lot of different breeds of metallers. I can see them touring with Slayer and Cannibal Corpse and they would be perfect at any metal festival. It’s a nice balanced mixing pot of styles that never branches too much in one direction. They have catchy riffs, infectious choruses and just perfectly put together short sharp songs. "Metal To The Bone" as dark and raw it is it’s above all a fun album that celebrates the greatest music on earth. Which we can all get behind! 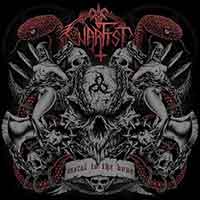