Warrant from Germany are back in the studio! It has been a long time coming since live shows started to appear again over the past few years. This time reverting back to their original three piece set up, which features original member Jörg Juraschek on vocals and bass, Juraschek is accompanied by two new members (although Dirk Preylowski [Guitars] did feature on the ‘Special Edition for WOA 2011’ single  which featured ‘All the Kings Horses’ and ‘Come and Get it’).

The standard ‘Intro’ is followed by ‘Asylum’ which introduces a refreshed Warrant sound and has a similar stance to some of fellow countrymen Rage’s material of a few years ago. ‘All the Kings Horses’ that was mentioned earlier has a more power metal flavour, with some cool melodies and plenty of opportunity to song along with the tune, then you get almost epic transgressions of greatness in the form of ‘Nyctophobia’. You have to face the enforcer during ‘Face of Death’ which isn’t a bad thing, its damn good actually, but with all bands that were around in the mid to late 80’s, please don’t expect a direct copycat of that era. This sounds much more genuine, this album develops their sound and doesn’t rely on past glories on their own but still retains their hunger for speed metal with refreshing results.

There is a re-recording of two of Warrant’s classic tracks ‘The Enforcer’ and ‘Ordeal of Death’ which are cool, but I always prefer bands to leave the songs in their original format and recording era/feel, I am not a fan of re-recordings at all, but this may tempt newer fans of the band the check out their original speed metal orientated roots.

It’s been a long time coming, but I have to admit it look a few listens to really appreciate the tracks, with first impressions being that of pleasure, but always wanting to find more based on my personal love for the bands original material. However, listening to Warrant at this time shows the band having grown in their song writing ability and shows that they are not afraid to mix it up. By that I mean adding different textures of both speed and power metal, something younger bands are perhaps not that comfortable doing at the moment. Warrant are back, the ‘Metal Bridge’ is solid, well-constructed and contains both old and new Warrant vision. A welcomed return, now we look forward to, or hope that a proper tour will happen! 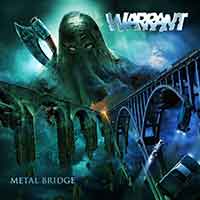