Do you like your metal with a lot of rhythm, intelligent, well thought out, and played with the utmost intensity and passion? Then look no further than Wolftooth’s new opus entitled, “Blood & Iron”. This is much heavier than your typical heavy/doom metal album, and the band drive that statement home with each of the 9 tracks presented here. With influences like Sabbath, Pentagram, The Obsessed, and other bands of the like, Wolftooth take you on an aural journey the likes of which you will not experience again in this lifetime. The way these tunes are orchestrated is simply phenomenal! The music flows along in a precise fashion without losing even the slightest amount of continuity. Then when you add the vocals to it, the sails are open to their fullest capacity and off you go; losing yourself in this deep musical enigma and their proclamation that is “Blood & Iron” with all the glorious riffage contained within!

Even in the 1st song 'Ahab', the band give you an idea of what you are in for, and they invite you along for the ride. The lyrics are as follows, 'From the sands of the eastern shore. Shining light that will shine no more. I hoist my sails to the sea. Waves that crash up beneath my feet. Cascade water that covers me. I charge our path through the sea (Wolftooth 2021).' Now we know what this song is about, but just as this passage is preparing Ahab for his journey, so the band prepares to take you on a journey for almost 47 minutes! So, you can see it is quite fitting the way the band started this album off.

“Blood & Iron” is an album that will have you reminiscing a bit, and for good reason. These guys haven’t forgotten who laid the groundwork for music like this and it shows in every song on this release. However, while remaining true to the masters that came before, Wolftooth are blazing their own trail in the metal world, and you can be sure that their grip is tight, and their mark is solidified and unwavering. There will be a lot of reviews talking about the music, production values, and other aspects of the album with which there would be no doubt that everything is on point and of the highest order.

My approach here is to tell you that, yes, this new album is awesome without a doubt, but the band goes a lot deeper than just the music. I’ve written before about how passionate these guys are when I reviewed their self-titled album last year. I thought I knew just how passionate each member was about their craft, but this new album and all the hard work they’ve done to get where they are now has simply blown me right out of the water. You just don’t work this hard on music, play shows, record, basically putting your heart and soul into what you love and come out with something half-assed. No need to worry about that here. They could have put in half the effort and still sound better than bands that have been out a lot longer. I’m not trying to kiss ass here. I take music very seriously and I take anyone who shares that passion very seriously.

I took it upon myself to write this review because of the effect this new album has had on me. I am proud to own this album and, as corny as this might sound, I will listen to it every time I feel like quitting and giving up. These guys didn’t and look where they are now. Well done gentlemen! Contact the band for more information on this release which was released by Napalm Records. 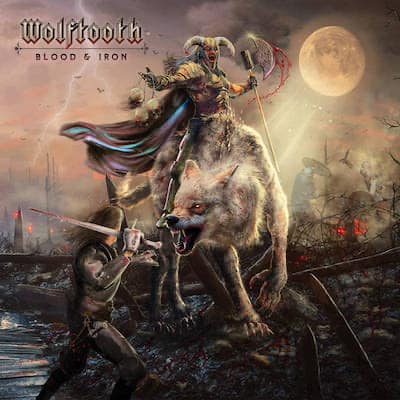