After almost 7 years with no new music (save for compilation with their first two albums in the last few years), Italy’s Xeper is back with another strong black metal release. While not doing anything wild and experimental like a group such as Imperial Triumphant would do to garner some attention, the band sticks its more 90s/ early 2000s black metal roots by putting out a sound that can be compared to the likes of groups such as Watain, Marduk, or Dark Funeral, with a little more cleaner production. This is fast, mid placed black metal here on “Ad Numean Satanae,” and while blasphemous as it is it holds plenty of surprises that it can’t be passed up.

Opening with ‘Fiat Interitus’ the guitar melodies and thundering drums almost feel like they have a black and roll feel to them, much in the vein of Satyricon. This is a little deceiving, especially with he layered clean vocals, as the rest of the album does not really touch on this, but shows that Xeper try to avoid the conventional route of going all out on speed and fury like a lot of their comparisons do. ‘The Hidden Genesis’ is more of a better example of what Xeper is about- well placed mid paced guitar melodies that still shred, raw shrieking vocals, and despite somewhat repetitive riffs, plenty of groove to really get into. The track goes by pretty quick though, which is also standard for your average black metal listener. Xeper also push their limits though again not only in the melodies department but also track length. They have been known to put out a track or two that stretches past 7 minutes in the past, but on “Ad Numen…” they push into 9 minutes with ‘Riding The Spiral Of Lilith.’ Adding more atmospheric elements and touching on some progressive elements such as slow drum solos, backing choirs, one hears a lot more evolution from Xeper and definitely will enjoy this pinnacle of the track as it steps away from the usual Satanic fan fare and delves into a little more esoteric realm.

The next few tracks go back to speeding things up, and while fans will love Xeper’s ferocious side, the evolved elements become a little lost that is heard on the first half of the album. While not bad tracks, it feels like the band slides back to their old sound that they’ve done before on the last few albums, which doesn’t make them stand out as much. There are some spoken word elements included to break up the snarls and shrieks, but the heavier guitar moments tend to drown them out as opposed to the quieter sections of a track like ‘Under The Will…’ The closing title track ends on a strong note though by its grim and ominous tones, despite being repetitive. It feels more atmospheric doom laden and possibly another route for the band to explore on future albums as they haven’t really touched on solo guitar moments with nothing else to interfere with it. Dark, melodic, and still has that Satan-esque feeling to it. Ultimately, this album may feel short with only 7 tracks, but Xeper have stepped up their game for sure with plenty of good moments so it doesn’t feel like and EP. “Ad Numen Satane” is dark and chaotic yet not completely volatile, leaving plenty of moments for new listeners to let the music sink in and really enjoy it rather than feel obliterated by the black metal melodies. 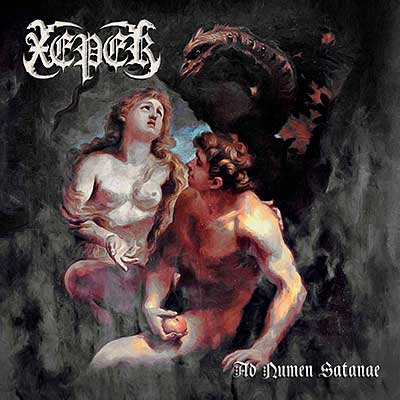 1. Fiat Interitus
2. The Hidden Genesis
3. Under The Will Of Satan
4. Riding The Spiral Of Lilith
5. Purity And Death
6. Snake That Brought The Flame
7. Ad Numen Satanae