Years Of Tyrants - Leading The Blind

I will confess that 'Leading The Blind' has been blasting through my CD player for at least a month now since it's release. There's no denying the pure adrenaline rush that fuels Years Of Tyrant's maniacal rage behind this technical masterpiece.

Starting track 'Stronger Than All' opens up as a joyful intro with it's last lyric belting out "Years of Tyrants!", as if you didn't already know the band you were listening to they just wanted to shove it into your face once more. 'Through Infamy' follows up on the intro's charms ramming technical assault through the roof. It'd be hard to name bands who sound like these guys yet the influences are clearly noticeable, them being taken from the likes of Misery Index, Crytopsy, and even a little deathcore influence from Beneath The Massacre, who are probably one of the more comparable bands to this sinister sound.

The album does not fail at track two, despite the length of some of these songs 'Infestation Of Larvae', and 'Euthanasia' are able to devastate with monstrous guitar riffs so out of control, almost challenging bands such as Rings Of Saturn. Brutal deathcore really initiates as the album progresses, more noticeable towards the ending final two tracks 'This Is Meat' where slight vocal changes can be heard, mainly uses the common death metal growls but also sticking to the ferocious roars used 80% of the time in the album. 'Of Those Who Wasted It All' proves deathcore doesn't have to be a trendy genre when tracks like this boast brutality. The goliath sized breakdown towards the end is in fact proof of this, definitely giving death metal a run for it's money.

Complex and intelligent music really hits boundaries within this record, forcing one to ponder on how Years Of Tyrants have not been snapped up by a massive record label, despite their already great success on France based label Kaotoxin Records. 'Leading The Blind' will leave listeners craving a future release from these technical mind-fucking lords of frustration and madness. 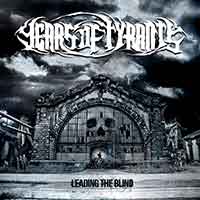