'Irrbloss' is Yggdrasil's third full album to date and also marks a new beginning for the band. After inducting friends and stand in members, Benny Olsson, on vocals and Jacob Blecher on the drums, there was a sense of reunited purpose for the group, and that fresh innovation shows on their latest album. While some who have not heard Yggdrasil before may think it is just another 'run of the mill Norse metal band,' think again, as the group puts its best pedal foot forward to deliver some pretty engaging folk metal, which do include a few black metal tinged elements as well. While the theme of 'Irrbloss' is focused on Norse mythology, the music is far from being patterned after anything along the lines of bands like Amon Amarth or Finntroll. Yggdrasil pride themselves on their organic use of folk instruments in tracks like "Tokikvad" which features uses of flute harmonies, bagpipes, and keyboards amongst the melodic black metal bits. The vocals sometimes feature that harsh snarl, but more often the band will use a clean chanting style that is easy going on the ears and pleasant to hear, such as with "Skaldefader." When the song kicks off and its just the choir styled chants going on, the Norse folk bits can really be heard and the vocal harmonies stay together nicely before the acoustic parts come in. It's a fantastic example of well versed folk metal that isn't too cheesy or overdone.

Other tracks like "Norrland" are more on the heavier side, despite that they start out sounding acoustic and fresh. The electric guitar parts just rip away in their high pitched melodic parts while the drums steamroll through in the background, but it is not entirely black metal chaos. Lots of times the guitars will opt more for repetitive, melodic sections rather than senseless tremolo picking and the vocals during the chorus are more in that group clean chanting that fans will appreciate so much. "Kungabål" features beautiful violin throughout the entire track before the clean singing comes in, and this time there is a female vocalist involved as well. When layered together, both the male and female clean vocals add a new dynamic to the music, and the female vocals in the background help as well, though the song might have been a lot stronger without them. Even though it is not listed directly, female vocals are often used throughout the album at various points, such as on the first track, though they may be hard to hear when the 'metal' side of the music is raging on. Still, overall 'Irrbloss' features good musical chemistry between the new lineup and doesn't turn the Yggdrasil lineup on fan's heads who have been following them since their debut. New fans would do well to start here as well as it involves music that is more folkish than black metal compared to past works by the band. 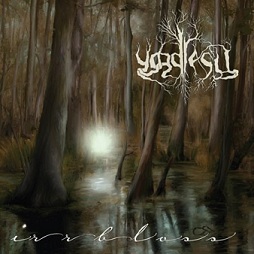