So here it is... the great folk album that started it all. Despite some critics who disliked it, one can definitely see how 'Kvällningsvindar över Nordrönt Land' was so important in shaping Yggdrasil's sound. In its catalogue so far, it stands as a very unique piece for the band for several reasons. For one, the music is a bit more raw and not as polished as the later albums, so there is a bit of fuzz to the music. At the same time though, it doesn't sound bad at all since everything is a bit more easy going compared to later works. There are less black metal influenced passages and lots more folk elements such as acoustic moments, violins, highly melodic passages that lend a few notes from melodic death metal, and tons of viking chorus clean vocals along with intriguing female vocals as well. A track like "Frid" is a shining example of Yggdrasil at it's best with the violins in the background, the clean vocals moaning away with the female vocals layered behind it, and just a very rhythmic, flowing pace of the music that is just as mystical as it is metal. Other tracks like "I Nordens Rike" are a bit heavier and include some of the growling and snarling that would later proliferate the future works, but it's still a highly organic folk metal track.

One very unique thing about the album is that the last original track was a complete acoustic piece with the female vocals getting a complete lead in the music and also using the male choir vocals in the background as a faded, atmospheric part which just heightened the experience. Later, things like this would not happen at all which is a sad note to Yggdrasil's credit. So, fans should enjoy this album while they can. On the other hand, much of the album tends to stick with the folk styled instrumentations and switching between electrified and acoustic passages so much with the viking choir vocals sounding a bit one sided as they stay in unison can detract from the later diversity of a later album like 'Irrbloss,' Yggdrasil's latest and more enjoyable effort due to the rounded out mix of modernized folk metal. Still, little bits like "Älvadansen" are a special treat that cannot be passed up. Other tracks like "Vinter" are also pretty special due to the baritone use of the vocals so they are much more effective while the violins ring loudly in the background before the demonic vocals come in, which actually sound much better here than they do on future albums due to their harsh quality.

As a downside, this re-release features nothing worth picking this up compared to the original. The bonus track is just an edit of the song "Gryningstid,"and it doesn't sound much different from the original save for maybe production quality. It is possible that it was featured from one of the demos where all the original tracks for this album came from- rare demos as that- but still, many may consider it a cheap marketing move by trying to find an excuse to re-release this album. Therefore, fans of the band probably already have this and shouldn't bother with buying it again; the bonus track isn't worth it and the new cover art isn't much different either. However, those who might be hearing the band for the first time should definitely check out 'Kvällningsvindar över Nordrönt Land' compared to Yggdrasil's other works if they want to hear folk metal that is a bit more unorthodox or more organic/ acoustic that doesn't involve all the black metal tinged fluff in between that makes it heavier than it really needs to be. 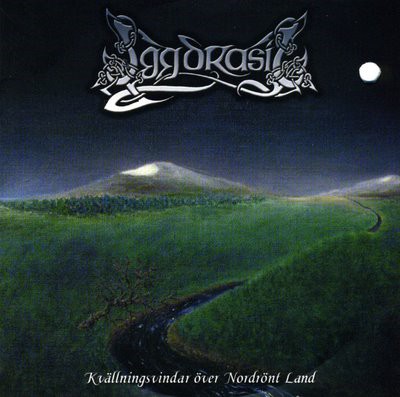