Barely two years after its original release, Yggdrasil decided to re-release their sophomore album 'Vedergällning' as a way of helping fans rediscover older works since their powerful release of 'Irrbloss.' Though 'Vedergällning' is not as refined as 'Irrbloss,' those who compare it to the band's debut will notice a very large chang in sound. For once, the clean vocals take on the more group viking chorus effect with heavy folk elements and the black metal snarls are more present vs. the acoustic instruments and organic feel of the music altogether. Overall it is just a lot heavier and more commercialized in the style of sound; the debut album was such a great folk metal piece, but compared to it, this album just doesn't measure up in scope. However, it was an important step towards 'Irrbloss,' which is perhaps one of their finer works to date.

For those who never heard the original, one can expect this album to be switching back and forth between heavy, melodic death metal styled passages and softer acoustic, almost progressive moments. There is a unique middle eastern flavor set up on "Vitterdimmorna" that makes the track probably the highlight of the album, and the blend of harsh and clean vocals (which almost act like backing choirs) are well balanced and present an excellent standard of folk metal. Sadly, the female vocals that were often present on the debut album are almost completely absent from this album- there may be bits mixed in the background that are hard to hear over the noise- (thankfully, they return in the future) and they would have been a huge help to this album. The violin, keyboards, and acoustic elements such as on "Valkyria" are well produced and sound as good as ever, but due to the black metal tinged influences the heaviness of the music tends to blot a lot of them out and doesn't let them flourish like the debut album did. The only part where one can really get a taste of folk flavor that is completely untainted is "Vitterdimmorna," which again, stands as the album highlight due to a different musical structure. Other tracks like "Oskorei" and "Storm" are highly melodic in their guitar work and also feature great clean vocal passages, but still are too electrified in the melodic death metal territory to be considered original folk metal. One can easily compare it to Heidevolk, however.

For a re-release, 'Vedergällning' probably could have just stayed as an original. The bonus track provided doesn't really add much save for sounding like a demo piece that was never released. It's heavy, so it sounds a lot like what was already presented. So, therefore, this album is only worth picking up for those who haven't gotten it yet. There is no remastering here, no new re-recording of vocals or anything, so older fans, and even diehards, should probably pass up getting the re-release or try to find the original version, which still has all the great features of this folk metal release from Yggdrasil. 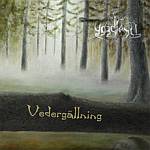