Ysgaroth - Storm Over A Black Sea

Representing metallers from Canada, Ysgaroth’s. "Storm Over A Black Sea", features an array of techniques and styles. According to their Bandcamp page, "Storm Over A Black Sea", is their first album, or it is the only one listed under their own profile. The sound runs a ton of styles, a lot more one might think of a trio. Maybe the close-knit band of three allows for more exploratory playing or something. Not sure.

This is certainly blackened metal in its overall vocal stylings, generally. But where we might find a melancholy or haunting opening featuring something other than guitar, the opening in the track ‘Rain’ is pure guitar playtime over a drum and bass skeleton. I mean, the second track, ‘Nam Gloria Satanas’, takes one a life of its own, a much more wailing blackened tone compared to the decidedly ‘jam’ opening.

The third track, ‘Sacred’, is where things get fun though because the guitarist plays well in different styles, the drum and bass support – but do not stick out. The vocals, however, take a fresh stand for themselves. There are some blackened metal moments for sure, in the more traditional style, but the track also contains some throaty growls – which I have to say, I really like this addition to the track.

The real nugget of play and exploration in this album is the 17 + minute final track, ‘Deluge’. it opens with powerful slow sludgy guitar distortion, but then slows down to a very interesting drum and bass riff session with softer blackened vocals over – the guitar spends that time in off the front. But then, the forces of power and direction come together and the energy picks up again. I would have to say that this track is a fabulous clincher for the album, but also just as a track, it is super.

If you are down with noisy bands, and are okay with a few of the ‘black metal’ rules being broken, Ysgaroth’s, "Storm Over A Black Sea", is the album to check out. 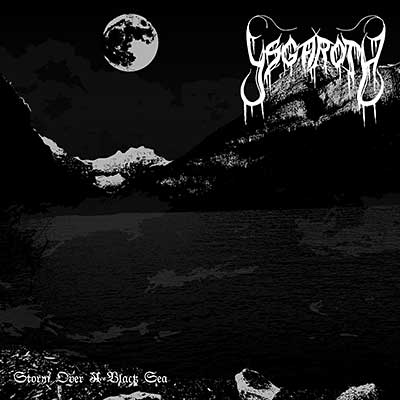