Yskelgroth's debut, 'Unholy Primitive Nihilism,' lives up to its name. The band performs ugly, raw black metal with maybe a tinge of death metal that is so distorted and high paced that it sounds like it belongs in Hell itself. And perhaps rightfully so. There hasn't been an album that sounded this agony wracked since the first Striborg album or Gorgoroth's debut. The album begins with a gritty introduction that sounds haunting and industrial before the track "Morbid Dwell" just rips into the ear with its furious drums drilling away and the guitars hamering riff after riff. Sadly, the distortion created it so powerful it tends to dim out the vocals, which sound like a caged beast just waiting to be unleashed. Minimalism is the key here is everything just rages on and on in short doses. Yskelgroth do tend to throw out a solo here and there, but overall tend to stick to a one sided musical structure that may very well turn away fans just as much as it attracts them. It's simple, but in a complex music world, sometimes people want more.

The only issue with 'Nihilism' is its tendency to sound the same by the time "The Apotheosis..." rolls around. At this point Yskelgroth keep attention through the solos, but then comes "I Deny" which just sounds like one big solo, and the vocals just sound completely irrational as a barking, vomiting mess. Perhaps this is how the band defines evil, and while it does help for effect overall, at the same time it makes things seem laughable. "Blackest Of Blackness" pulls things together with some more cohesion in the music and how things flow together in their primitive buzzing power, but the vocals still have that mockery of evil going on. The same can be said for the other tracks It's not until the "Outro" that things slowly fuzz out and listeners can shake their head at what a nightmare the listen has been. Good or bad?

Well, if Yskelgroth's idea behind their album was to make a raw, evil album that is very hellish to listen to and embodies the entity of all evil without needing to make sense... then they've nailed it with this album. At the same time, it takes fans of lo-fi black metal or bands like Sargeist and early Horna who also perform filthy, gritty black metal that go more for an appearance of evil and raw power than comprehension to get into this. Only the best for the 'elite' of black metal eh? Other metal listeners may find the band's approach through speed and distortion riveting, but only after a short while. Once one figures an album can be heard basically by skipping through different tracks and not missing a beat, it tends to deaden the experience overall. 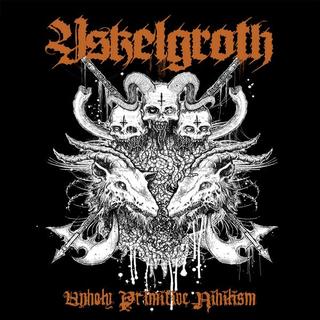