Denmark doesn’t offer many Black Metal bands as such, but Zahrim will definitely compensates a lot for this kinda lack!  Managed by Aeljutur (Martin Rosendahl) who is also behind notorious bands as Exmortem, Corpus Mortale, Usipian and Iniquity among others – this very project in junction with session musicians delivers an eerie sounding Black Metal (unlike the other bands), and indeed Zahrim has quite a sound of its own!

Liber Compendium Diabolicum (The Genesis Of Enki) represents a collection of songs taken from the previous demos and EP. Zahrim performs old school primitive Haunted Melodic Black Metal, but unlike typical BM sounded bands, Zahrim, in general incorporates deep sounded guitars. In addition, another remarkable thing in their music is the use of synthesizers which may vary from simple chords to fill in the background to occasional technical performances. Synths don’t play a major role in their music, but it is incorporated distantly in the background which helps to evolve that gloomy atmosphere as well as melody…so yes…synths are not the main dominant thing here. Again the main course is Metal and so with the overall production!

As stated previously this CD is a collection of previous songs, and the difference between a set of songs and others is quite noticeable by production and development in general.

Track one to track four represents a collection from ‘Ia Zagasthenu’ which strictly speaking consists of 4 tracks filled with tempo variations (slow, mid-tempo, fast-paced). This very collection is quite a representation of a well made old school black metal release.

The next batch, which I find it the most pleasing is taken from ‘Ultu Muxxischa’ – four tracks well performed and exquisitely arranged. Maybe I got a soft-spot for deep sounds, cos as a matter of fact…this is ‘DOWNTUNED OLD SCHOOL BM’ coming from the core of all gloom! Apart from the down tuned guitars, the background synths play a marvelous part in both sound (somehow deep) as well as in melody both strengthening the darkest glooms behind their atmosphere. All in all the songs of this batch feature various tempo changes which again…makes the whole thing rather enjoyable!

The final batch is taken from ‘Mashshagarannu’, which their debut demo is made in 1996. Being their very first release, it is also well made perhaps with the exception of the recording quality which is slightly poor in relation with the other releases, but again…this so called poor quality boosts both music and that somber atmosphere. This very batch sounds somehow like a kinda Burzum meeting Darkthrone except for the occasional background synths.

Those who are into acts like Darkthrone, Nehëmah (FR) and Bekhira will enjoy this album, however by saying that, I don’t mean that this is a clone of the mentioned! Zahrim is quite unique, and if you take a listen, you will understand what I mean! I strongly suggest this splendid release to any Black Metal listener to give a good listen as I am sure that you will find this band a real attraction. -- HIGHLY RECOMMENDED! 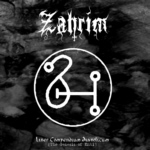