It takes some time to get used to the Black/Death Metal approach of Zardens on their debut album "Breeding The Dark." The album opens with the highly symphonic "The Coming Dark" which makes the music feel more like Emperor reincarnated, but this is about as symphonic as the album gets. From this point on the band unleashes a storm of fast paced Black Metal mixed with Death Metal vocals that is enjoyable to hear... at least for a little while. Tracks like "The Last Curse" are high energy outputs of sound, but by "The Crown Of Darkness" the music tends to be a bit repetitive. The production is certainly clear enough to hear the snarls, guitars, bass, and drums altogether without any a problem, but it feels like something more is needed to really hook listeners. Fast paced Black Metal tinged with melodic Thrash moments is something that has been done before many times and Zardens can burn out listeners a little too quickly at first without delivering that 'something.'

Of course, that something comes in right about "The Howling Shadows." Like the opening track, Zardens does a great job at bringing back the atmosphere by throwing in an interlude that includes some solo bass work, a few howling samples, and overall a very chilling effect that is brief but may wake up anyone who fell asleep at this point with the album. Other tracks like "The Nightspirit" have some acoustic moments and a bit more complex interludes/ solos that don't sound so Speed/Thrash metal influenced. They're not quite as dark or foreboding as Emperor, but work well to Zardens' advantage. The closing "When Eagles Fly" breaks the whole "The..." track opening and forsakes storytelling for just an excellent instrumental that mixes Black, Death and Thrash Metal for a sonic output that is the last boost that Zarden needs to get listeners to open their eyes and see that the music here is anything but typical. Sure, the  band could have gotten their attention with a little more diversity in the begining and even played the symphonic moments a bit more, but overall this is a strong debut to begin with. 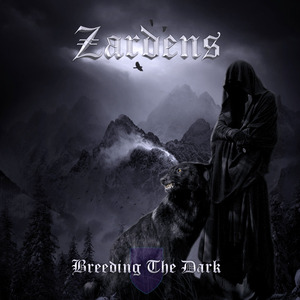