France’s Zoldier Noiz return with an absolutely shredding opus entitled “Regression Process”. This masterpiece of thrash has 10 songs and has a running time just shy of 30 minutes and while the band indeed have a strange name, they prove in such a dominating way that songs don’t need to be 6 or 7 minutes long to be powerful and get the message across. In fact the longest song on this release is 3 minutes and 35 seconds. From the beginning of the first track to the end of the last, “Regression Process” is 100% pure sonic obliteration. Bombastic in sound and production, this release has the potential to be one talked about in the underground for years to come.

Music wise this is another gritty, dirty played slab of material. Part of this sound could be attributed to the production which I would almost count on. Absolute classic style riffing in the vein of Devastation, Cyclone, Vio-Lence, and other bands similar to these. Total 80’s thrash worship all the way, but there is also a death metal style vibe in the riffing which in my opinion is from the early 90’s. It’s a slight vibe, but just enough to balance out the thrash aspect. Imagine if you will the above mentioned bands with about 5% influence from Autopsy’s “Severed Survival”. The solos on this album are well constructed and implemented in extraordinary fashion. They sound a little dirty and gritty as well, but not as much as the riffs. The solos don’t sound as if they would on a more “well known” band’s release. It’s like the band has tuned things a little lower and in retrospect, could add that little extra thickness to the riffs. The drums on this release are phenomenal. One of the best thrash drummers I have ever heard, bar none! The snares and symbols are hit with awesome precision, but what blows my mind is the double bass. It may not be the fastest or the most technical, but damn this guy could hit that double bass with the best that this genre has to offer. I will even go as far to say that this guy could give Gene Hoglan a run for his money. I mean absolutely no disrespect to Mr. Hoglan, but this guy here could very well take the drum crown of thrash metal!

This is another cd where the bass guitar gets just as much attention on production as the other instruments. Monotone in some sections, but even so it blends so well with the double bass and snare from the drums and seems to carry the riffs to another level. A fantastic player who fulfills his part in the band damn near flawlessly. It’s just amazing, the production on this cd. Whoever produced did a perfect job on it. I cannot hear at any time on this cd where anything is out of balance. This cd is like the perfect example of fung shui in thrash metal. Everything harmoniously blended and put together and recorded at the perfect level to give the listener 100% pure listening enjoyment. The vocals aren’t really your typical thrash metal type vocal. It’s like blending the vocals of Bolt Thrower, early Napalm Death along with the above named riff influences. A very unique and innovative vocal pattern for this type of music. Bands like this are really inspiring because you can hear from the music that they create that they actually give a damn about what they are putting out. Their sincerity and hard work, not only reflects their awesomeness as a band but also reflects on the type of people they are. You can just tell from this release that the band is dignified and proud, and from the songs on this cd they have every reason in the world to be proud and dignified. It is no wonder Unspeakable Axe Records signed these guys. Yet, another highly respectable release on what is soon to be a highly respectable label! 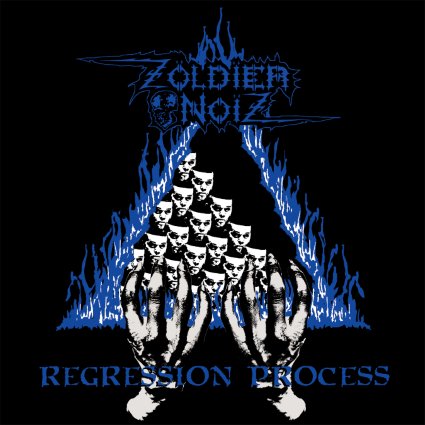