Zombiefication - At The Caves Of Eternal

Really how nice it is to listen to a new album from a band you thought promising on their first full length, and their second one just proves, you were soooo right! This is what happened with those bloodsucking vampires from Queretaro, Mexico. Their first full length "Midnight Stench" of 2010 was a total old school satanic destruction, and of course I was waiting for this second full of them. They released an EP at some point during 2012, but nothing can be compared to a new full length, and of course "At The Caves Of Eternal" is a new megaton of hate for Zombiefication on 2013. Fucking old school spirit to the fullest of the full. Everyone is there. Entombed, Grave, Centinex and Asphyx are some of the names I picked while listening to them, and of course the filtering is done so well, that their personal style prevails. Thats right bros, so many influences but the music still reeks Zombiefication.

Those bastards have managed to create a sound so rotten that it is hard not to recognize them, even if you haven't heard of them before! A total swamp of old school riffs, meets the steady and groovy drum parts, that are so carefully and brilliantly performed, that make every inch of this CD, reek the rot, they so much like to produce! The bass player is an altered beast from the dirtiest swamplands, with an ultra low sound, emphasizing on the kick drum, making this whole atrocity sound soo powerful damn it! The vocalist couldn't be anything less than what the others are. No special tricks and modern methods of brutal singing here. Just a good cocktail of gasoline with spikes and his throat is ripped for your own entertainment! Growls and shrieks are his preferable way of expressing his wrath, and here they fit perfect!

Most of the releases I've heard this year that originate from South America are mostly awesome and I cant explain that. I guess it has something to do with the water. Can't explain it else. What is so important though with those beasts here, that make them so distinct is that I believe they managed to create their own sound, and that, is something really hard to achieve nowadays! Zombiefication is no pioneers in the block. You will find no new stuff here, and no new view and aspect in death metal. But in times of speed and utter technicality, ultra brutal inhaling vocals and drum programming, this release here is just a slap in the face, a proof that it can be done without having to use a PC, and without practicing 25 hours a day, 8 days a week! All it needs is the lust for something you love, and these guys from Mexico seem to live old school to the bone. Their music proves it and you need no more than that. Get back in the cave and rot with them forever! 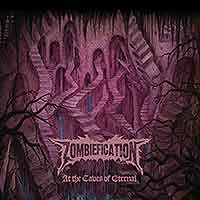