I remember their previous album, and me standing with a stupid grin on my face while I was finishing the hearing process. It was obvious that those guys could play and it was one of the few bands that had this 90s era feeling so well embedded to their music. The continuation of "At The Caves Of Eternal"(their previous one) is this one here. "Procession Through Infestation" is the title and it carries the torch from where they left it with their previous work. Uncompromising, rough and mean old school death metal following the lead of bands as Incantation, Grave and Entombed. This time though, they managed to change a really important aspect of their music.

This time Zombiefication has a clear view on how they want it and their music is more unique than the previous one. This time they achieved on deleting any comparison with any reference bands. This time they have a solid death metal style and this gets obvious from the minute the play button is pushed until this one ends. From a first pick of the ear, what those guys play is old school death metal. Rotten as it gets and this is something they achieve not only by their riffing or song constructions, but also from their production which is really muddy. Something of course that helps a lot cos this type of production is precisely what this genre needs more than anything. It kind of brings forth a reek of demise those. And those crazed Mexicans have it in them in undying quantities.

From the beginning to the end you get the feeling of a heavy tombstone upon your chest. A total hammering of the ears as these ravagers hit as hard as they can. Riffs that breathe in rock'n'roll but dirty and nasty construct  some sick story each time, with the bass guitar following heavier than ever, and the drummer destroying in an old  school way everything. The vocals are of course not following the typical death metal growling patterns. They are angry and harsh, bringing a lot of Lars Goran in mind, and the Swedish school in general. So imagine all the above wrapped under tons of dirt in a production that makes the whole outcome smell like a carcass rotting in the hot Mexican sun for months. Ad the awesome cd layout to the whole package and there you have it. Early Christmas present to yourselves! 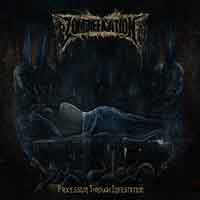