This Mexican old school death metal band really impressed me with their last effort ‘Midnight Stench’ and this new EP also has plenty of audio sickness waiting in the darkness only to emerge and slap your senses silly. Recorded at the famous Necromorbus Studio (used by death metal masters Desultory and black metal purveyors Watain), the sound is probably the dirtiest, the best sound I have heard recently from bands heralding the old school Swedeath sound. Whilst only a two piece band, these sombre men know how to deliver music that ticks all of the available boxes. Their artwork, whilst still maintaining their blue colour visual concept, is in itself a clear piece of genius (penned by Mr Hitch himself – that’s the Zombiefication vocalist).

The reduction in the slower paced numbers means that tracks flow with greater ease than their earlier material; take ‘I Am The Reaper’, with its immense rhythm section, battering kick drums and underworld nattiness to the guitar sound. This album sounds a lot like old Entombed, right down to the screams of pain coming from Mr Hitch. ‘Reaper’s Consecration’ sounds like a monumental release by a seasoned bunch of musicians with tracks that endure such a rotten melody; there is no doubt that these will become memorable death metal anthems. Contenders to the throne of the elite they are, and ‘Death Rides’ solidifies this statement because it has all the hallmark running riffs and percussion you could ever want. ‘We Stand Alone’ proves that there is variation in their arsenal, a track that completes the path of rottenness, a track that has an arrangement that is far from stagnated in heritage, there are some interesting flavours to the sound, and it still gives you chills down the back of your neck when you crank up the volume.

This is certainly a move in the right direction, if you want a band that has a classic death metal tone and delivery, a band that does more than merely copy the past masters, then Zombification are for you. This EP is a real step forward for the band, their momentum knows no bounds, this is a very filthy release and I for one have no problem being as dirty as the next Zombiefication fanatic! 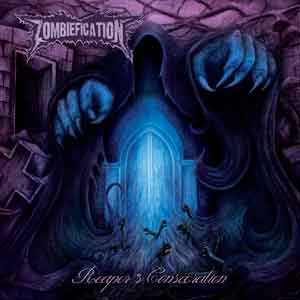