Zombified return with a second instalment of their brand of crust inspired death metal. If you are new to the band then be prepared for an aural assault and to seasoned Zombies, expect something more wholesome than brain soup alone. 'Pull the Trigger’ has a great Dismember feel, a cool battering that is low end heavy and then comes the crust influence gnarly as ever, essentially everything I would really want from such an album. The sound is precise, the chord structures and arrangements are easily digestible, it is a perfectly captivating experience. The artwork does seem rather familiar, but then again it is penned by the same guy that has worked with Demonical and genre pioneers Grave (Costin Chioreanu), so you can be excused for some visual similarities. There will be a mere 500 copies going to vinyl but I do feel the sound does appear to translate to modern digital sound sources easier. It is thick, full and can be the cause of friction between you and some of your neighbours if you play it loud enough. ‘Suffering Ascends’ capture’s Zombified’s complete arsenal, there is also some bloody loud bass booms/cannon’s on this one that took me by surprise, it’s fast, slow, dirty and oh so heavy…as is ‘Corrosive Spiral’.

This is a certainty for fans of Bastard Priest, Panzer Bastard (no… bastard is not the intended metaphor!), Vomitory and Paganizer. It is classic old rotten death with a violent mix of crust… this will sort the men from the boys, although in the overall spectrum of things, I kind of expected this release, there are no doubtful surprises and it is certainly not for fans of modern overtly technical death metal. I can settle for the simple brain splattering that Zombiefied have come up with no problem, not bad for a band that originally started over a fair few beers and possess current and past members of Paganizer, Tormented, Scar Symmetry and Facebreaker. 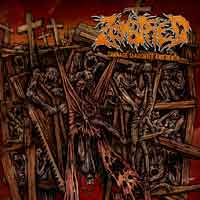