Zora is a brutal death metal power trio from Calabria, Southern Italy. "Soul Raptor" is their 3rd full length album on which they focus on such topics like sociopolitical abnormalities, human psychology, enslavement games the governments play on our backs, mind control, mental alienation of the modern world, media misinformation, the sickening effects of the internet in socializing, violence and brainwashing. Thus the anger and hatred come to the foreground of the expressed emotions in the album. An album which comes out on a limited to 300 hand-numbered copies CD edition and is a co-production of 3 labels: Maxima Music Pro (Indonesia), Wings Of Destruction (Russia), and Old Metal Rites Records (Brazil).

"Soul Raptor" was recorded, mixed & mastered at Gianluca Molè's (the band's guitarist) own SoundFarm Studio in Catanzaro, Calabria, Italy in 2020. The album has a very strong and massive sound that takes you with it right from the first song, 'Social Fakework'. The riffs are based on the mid 90's death metal ways. They are twisted and sick. In the middle of the song there is a mid-tempo part with some cool intonations. The grinding vocals are mixed with gutturals in a very nice outcome. I particularly enjoyed the palm muted riffs Zora use to bring on the groove and sickness.

'Induced Objectivity' begins with a haunting Suffocation type riff. There are some modern death metal parts in the song, but the groove is always based on the old school brutal death metal tactics and feeling. The lead guitars sound as if coming from space. The vocals just won't let you breathe for a second. On the same path, 'Lobotomy' and 'Brainwashing' both have very nice guitar licks with technical parts. Zora change the rhythm many times throughout their songs and this makes them even more technical.

'Distorted Personality' shows again the American death metal side of the band with direct references to US brutal death metal (Dying Fetus, Deeds Of Flesh). There are some great themes in the song which is a truly great headbanger and one of my favorite tracks from the album!
'I Can't Breathe' is another fantastic brutal death metal song with references in the riffs and the vocals to Cannibal Corpse, especially of the “Vile” period. There was a lyric video released for this song few months before the release of the album and it was the first song that attracted my attention on “Soul Raptor”.

The same titled 'Soul Raptor' is a fast death metal track with a great staccato part in the riff. The groove is really huge at the beat-down part and then the chaotic vocals and grinding rhythms bring hell on. 'Hypnotic Obsession' mixes perfectly mid period Napalm Death with some Swedish type of riffing in a very interesting song with nice attacks and power.

Although there is also an outro called 'The Grand Act' with some weird riffs, effects and electronics in what sounds like a space odyssey, 'Ego Psychotic' is actually the last song of the album. The vocals here sound devilish in a Deicide manner. The song is demonically fast and full of hatred, anger and disgust (yes! Just like the Pyrexia 1995 EP). The leads sound like a demonized Slayer version. 'Ego Psychotic' is a clever addition in the album that adds truly a lot to its diversity. It also makes a very nice closing track!

Although Zora have shaped their sound to an own style, they don’t hesitate to experiment, they treasure their death metal roots, but they also remain open to new things, they progress with every new release, but above everything they manage to write clever and interesting songs that are memorable and not alike, and they end up covering the whole brutal death metal spectrum from the 90's on with their own signature sound. I think this is a win! 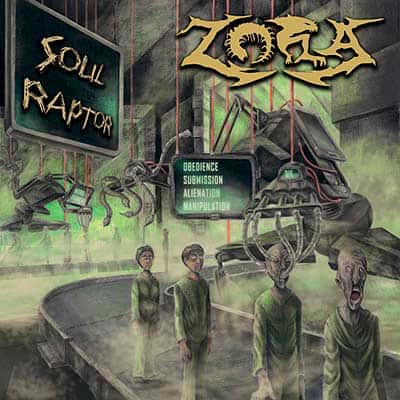